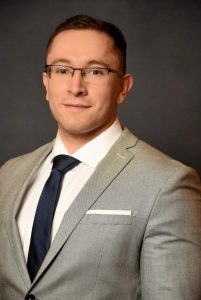 Erik is a cage fighter. Erik speaks and writes three languages. He is a black belt in Kempo Karate from the A.C.K Institute of Martial Arts in Los Angeles County. Prior to his law career, he successfully owned and operated a profitable commercial business.

Academic scholarships led him to attend law school in his hometown. There he focused on becoming a trial attorney and was chosen for the American Board of Trial Advocates fellowship program.

Within days of being sworn into the California Bar, Erik devised an electronic evidence presentation strategy and was in trial on a multi-million dollar construction claim between major corporations that resulted in an eight figure award.

Six months later, Erik drafted all witness examinations, opening statement, and strategic trial exhibit presentation in a complex construction matter with competing counter-claims.  Faced with the intense pressure presented by the trial team readiness, the opponent settled on the court house steps, agreeing to pay the client eight times the amount that the opponent had previously demanded be paid to them.